Learn about Some of my favorite BTS members! 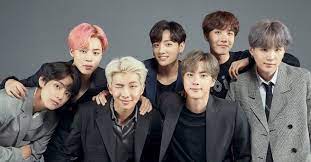 BTS, also known as the Bangtan boys , is a South Korean boy band consisting of seven members. They have exploded internationally with millions of fans worldwide! They hold 18 world records and hold numerous awards such as MTV Vmas, American music awards, iHeart Radio music awards, and many more. The seven members have stolen the hearts of many fans, or ARMYS, world wide. They are known as Jungkook, Jimin, Jin, J-hope, R-M, Suga, and V. Each of their unique talents and personalities create hilarous moments and hearfelt songs. This website will be going over two of my favorite members, Jungkook and Jin.

learn more about the individual members!

To learn more the Bangtan Boys, check out their webstie! BTS WEBSITE!